How to Build the K9AY Loop Receiving Antenna

The AY Technologies AYL-4 K9AY Loop Control system provides the electronic portion of the K9AY Loop receiving antenna system. Here are the instructions for constructing the loop itself. If you don't want to make the loop using 'homebrew' construction, we also offer the AYL-M kit that includes a mast, wire and all the hardware needed to construct the antenna.

Terminated Loop Basics
The K9AY Loop is one of several published designs that use a terminated loop to get a directional pattern in a small space. The EWE, Pennant, Flag and others all operate using the same principle as the K9AY Loop, and they all provide a cardioid pattern with one deep null. In simplest terms, these antennas are very small phased arrays, with the vertical (or mostly vertical) portions being the main elements. The termination resistance balances the currents to provide the best possible null. It is also possible to explain the loop's behavior in terms of its response to the E-field and H-field components of the arriving wave, but this is more complicated than necessary!

The main advantage of the K9AY Loop is that the feedpoint and termination are at the same location. Simple switching lets you instantly reverse the pattern direction by exchanging the feed and termination. Using the AYL-4 unit and two crossed loops, 4 different directions can be selected, giving you the greatest flexibility in reducing interference and hearing the signal you want. Switching from one direction to another can mean the difference between solid copy and a signal covered up by interfering stations!

Horizontal and vertical radiation patterns of the K9AY Loop over average ground:

Construction Details
A single loop that will cover the 160 and 80 meter ham bands requires one 25-foot high support and 85 feet of wire. The basic layout is shown here:

Construction of a single K9AY Loop: 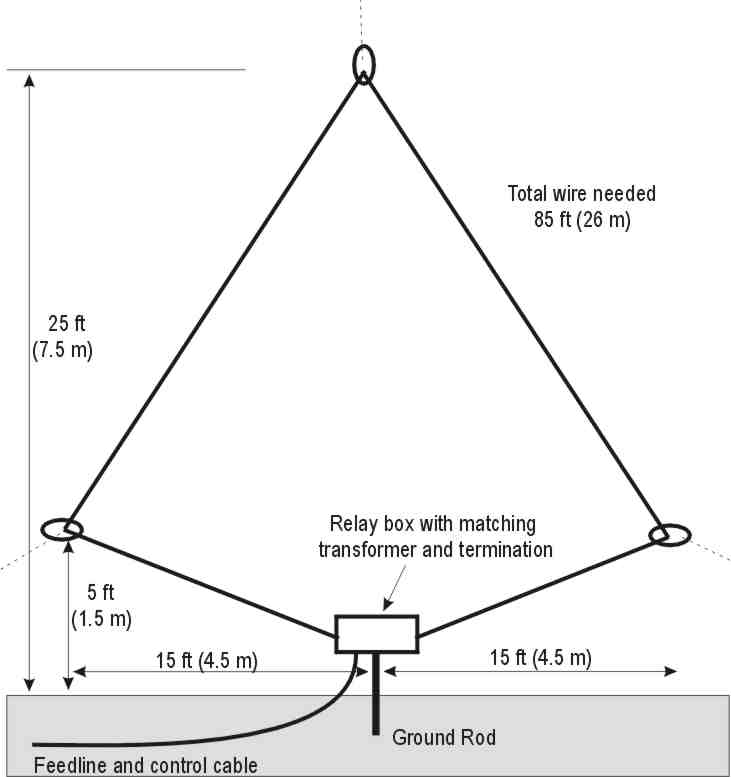 The matching transformer and terminating resistor are located in the AYL-4 relay box, so you only need to install the basic wire loop, its support and insulators, plus the ground rod. The support can be a tree limb, a strong mast, or anything else that will hold the loop in place.

The AYL-4 4-way loop control system uses two of these loops, sharing the same central support, but oriented at right angles to one another. The relay box changes pattern by switching the feedpoint and termination connections-front-to-back by reversing the ends of a loop; 90-degrees by switching from one loop to the other.

Grounding
A 4-foot ground rod (such as 3/4" diameter copper pipe) is often sufficient. If the earth is very dry, a longer ground rod is advised, to reach permanently moist earth-or you may install four or more 15- to 20-foot long radial wires for better coupling to ground. The grounded design of the K9AY Loop has several advantages over ground-independent versions of the terminated loop (Pennant and Flag), including simpler switching, no feedline isolation problems, and greater signal capture for the same size loops.

Preamplifier
All terminated loop antennas are inefficient, which means that signal levels are low. The K9AY Loop requires about 15 dB of gain to restore signals to levels similar to Beverage antennas. A preamplifier providing this gain, along with excellent bandpass filtering for 1.75 to 4.5 MHz, is included with the AYL-4 systems. At 160 and 80 meters, coax loss is very low, so a preamp located at the receiver is usually sufficient. In normal installations, we recommend against an outdoor preamp, since it is exposed to greater risk of damage from static discharge (lightning) or RF from nearby transmitting antennas. The most common exception is with extremely long feedlines, where a preamp at the antenna will boost the signal level to overcome coax losses and to increase the signal relative to any common-mode noise and signals picked up by the long feedline.

Feedline and Control Line Routing
As with all small receiving antennas, the low signal levels from the K9AY Loop require careful routing of the coax feedline and control cables. The best solution is to bury the cables and take advantage of the natural RF shielding of earth. Second best is to simply lay them on the ground, which is often done when receiving antennas are only connected during the Fall and Winter lowband DX season. We strongly recommend against above-ground installation, but we know it is sometimes unavoidable. If you believe that your feedline is affecting the pattern of the loop, it probably indicates that your grounding is insufficient. In this case, refer to the previous notes and other published data on grounding.

Using the K9AY Loop on Other Frequencies
The K9AY Loop keeps its directional pattern at lower frequencies, making it an excellent antenna for Medium Wave and Low Frequency DXing. Many Broadcast Band DXers marvel at the way switching the pattern lets you hear different stations on the same frequency. In some installations, the antenna may retain some directivity above 5 MHz, but this should not be expected. The preamplifier provided includes a bandpass filter that limits its use to approximately 1.75 to 4.5 MHz. A preamp is rarely needed for Broadcast listening or for frequencies above 5 MHz. For Low Frequency DXers, we can provide the AYL-4 without the highpass filter (no extra charge for this special order), which allows the preamp to operate down to 100 kHz or lower.